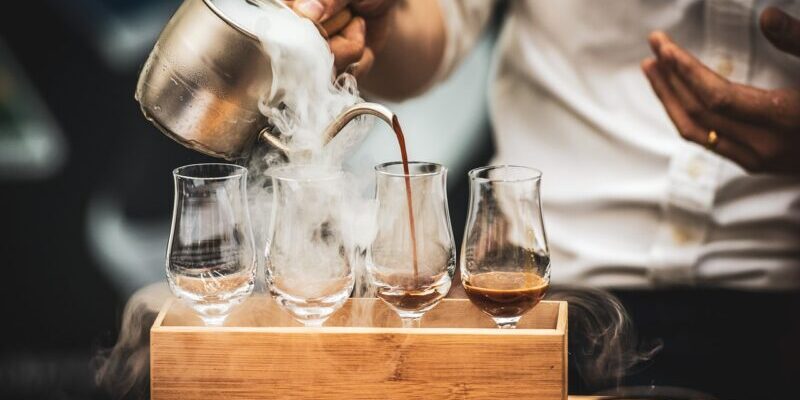 Coffee, according to a chain of cafes built around a Moby Dick character, is a ritual: Some people function fine without it, while others can’t live without it. If they miss their morning cup, they go through their day feeling as though there’s something missing.

I am, unfortunately, the latter.

My friend Kyle gives me hell every time I order coffee. To perhaps everyone but me, coffee is an unsaid order. Any question to my beverage choice is worthy of vocal resentment.

I sigh loudly. “Coffee. Black.” As if they should know.

I’m a coffee drinker. I have been for years now—I started drinking before any normal person probably did. I drink it every day, rain or shine, sleet or snow, weekend or not. I am, therefore, quite possibly a junkie. That’s the important thing to really establish here: I am not a coffee snob. Quite the opposite, actually.

While I’m not to the point of breaking into houses and stealing TVs to pay for my addiction (yet), any excuse to drink more coffee for “science” or “research” is like someone telling you to sleep in on a Monday. Writing about coffee for a real reason is like a dream. Hell, I defend regular black drip coffee for its own sake all the time.

What I didn’t count on, however, was coming to the sobering realization that the ooh-la-la, the “I’m-so-much-better-than-you” version of coffee—the Americano—is good. Better than good, actually. It’s delicious.

At its most basal level, the Americano is just espresso with hot water added to it. On a sensual level, it’s a lot more.

The birth of an underdog

History has the Americano starting as the concoction of U.S. GIs as they fought through the European theater of World War II. When they just wanted a good cup of joe, they got espresso. It was, to say the least, different.

Traditionally, espresso is served in a smaller cup than the standard mug of coffee. As an insultingly simple explanation, think of espresso the Sparknotes version of coffee. So, the American GIs, who were used to drip coffee like most of us are, added hot water to the espresso (in bigger cups, of course) and the Americano was born.

But it’s not the same—drink a cup of black coffee then drink an Americano. You’ll taste the difference.

As for the difference between regular drip coffee and an espresso, it comes down to more than just the “brewing.” When espresso is made, it doesn’t have the soothing, homey gurgling sound of a drip-coffee machine. There’s no sleepily scooping coffee grounds into the filter, closing the machine’s lid, hitting a switch and reading the paper while your coffee brews. There’s (a little) force involved in espresso making when you have to tamp the grounds together tightly and the somewhat disconcerting sound of a high-pressure jet of nearly boiling water shooting through them. And out comes that sweet, sweet wake-up juice.

Why your next coffee order should be an Americano

An Americano is everything you love about drip coffee but not burned, bitter, sour, from a rest area, or from the drive-thru of a fast food restaurant. It’s quick, relatively cheap and it’s delicious. It’s almost like what coffee was meant to be.

The nice thing about Americanos—and espresso to begin with—is its variability in flavor. Like a nice blended Scotch, espresso grounds often come from various sources around the world and brewers have their own specific formulas. It’ll take a very long time to try all of them.

But don’t get variability in flavor mixed with variability in quality. Messing up an Americano made with good espresso would be like setting cereal on fire during breakfast. An Americano is, at best, life-changing and, at worst, still a hell of a lot better than most black coffee you can get from a guy in an apron behind the counter.

If you get a bold espresso and just take little sips, you might get burned, you might have a bitter taste in your mouth for a few minutes. It might be overpowering. Like a shot of stiff Scotch, you’ll be able to really unlock the taste of espresso with water.

Don’t let anyone tell you differently. Adding some—not a lot— of water to Scotch is the way to really bring out the florals. Or the smokiness, the peat, the dark chocolate, the orange peel or any of those flavors lurking in the background. Similarly, you’ll be able to truly appreciate coffee if you add some hot water to espresso. You’ll get the full effect of what was meant to be tasted and coax out all the flavors you may have never expected to be hidden away.

As someone who grew up on legitimate vacuum-sealed bricks of coffee grounds, tasting the different varieties of roasts and coffees from countries all over the world wasn’t so much as a joy as it was an experience. Coffee, it was made clear to me because of the Americano, could be something you truly enjoyed.

And it’s that lovely, rich flavor that translates into each Americano, that lingering, creamy texture that keeps you coming back. No matter how many espresso shots you put in, there’s just something a little more elegant, a little more complex and hauntingly subtle about the taste of espresso. You can get more caffeine in a drink that tastes better. It’s a true win-win situation that will leave you never wanting regular drip coffee again.

And, as a final note, who said ooh-la-la was bad to begin with? Maker’s Mark built an entire campaign off it (“It tastes expensive… and it is.”) and you deserve it. There’s nothing frou-frou about a drink invented by the greatest generation of this country’s history while in the theater of war.